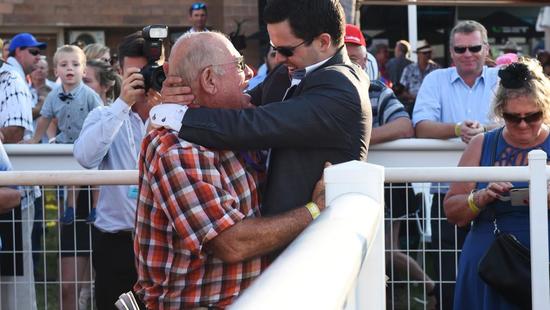 The 27-year-old, who got his training start in the Top End as a teenager, had not had a Cup starter since 2010, when Activation broke down during the race as the then nine-year-old gelding tried to defend his crown.

“It’s unbelievable — this is my Holy Grail and this is the race I strive to win more than anything — I love it,” Hickmott told the NT News.

“This is the place I got my start in racing and these are the people who got me to where I am today.

“I’ll never forget that and I’m just on top of the moon.”

Canny Ballad gained a position in the race only on Friday morning, when top Port Lincoln hope Montalto was a shock scratching. But it was an earlier decision to take the risk as a Cup emergency that paved the way for the mighty win in the 2000m feature. Pratt made the call, according to Hickmott. “Bob’s been my inspiration this year,” he said.

Hickmott said Canny Ballad’s victory was even more special, given his fiancee Jade Kluske — a part-owner — is having her own struggles back home at Murray Bridge.

“She’s having a really tough week,” Hickmott said of Jade. “She’s got an international-level, three-day event horse (Mighty Delago) and unfortunately he’s in a critical condition at the moment.

“We’re probably going to lose him, so to win that today is beyond special for her — she owns this horse and they’re her colours ... some people might want to win the features in Melbourne, but this is my home. I love Darwin.”

Hickmott left Darwin for Murray Bridge five years ago and has become more involved in the business of selling horses overseas than training.

That was despite Canny Ballad having a minor setback after racing in the Buntine Handicap (1900m) about a fortnight ago.

“It’s such a hard race to win when you’re on the back foot,” Hickmott said.

“Without Shayne Cahill helping me and Jamin Farebrother, the vet up here who’s one of my best friends, none of this would be possible.